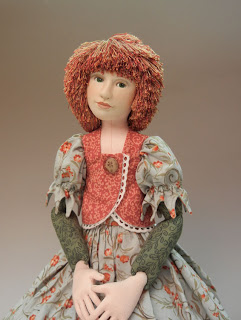 Finally, a completed doll after a nearly summer-long hiatus. This week I finished the last of four Averill dolls (which I see I started over a year ago! This last one has been lying around with her chosen fabrics for far too long). I've still been working on the paperclay-over-cloth doll from that vintage pattern, but had to do something while the clay dried. 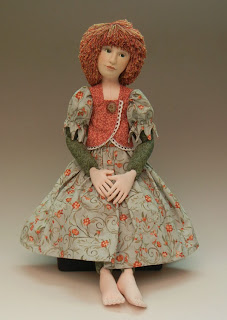 This one is made from peach craft velour. Her hair is upholstery trim, but it needed some serious trimming when the glue finally dried. Still could use a little trimming in the back.

I've also used my fingernail and toenail technique on this doll. 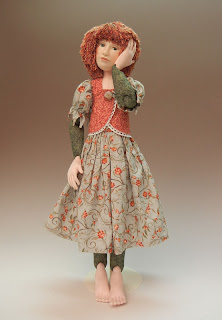 I received a comment to this post asking if Averill's hands are too big. I think they are. I also think her arms are a bit long. Part of the problem may be the result of stretch direction of the fabric. And regarding the hands, their design and construction probably contributes to the appearance of the size as well. I should make another, orienting the fabric to the stretch goes across the limb and hand to see if that fixes the problem.

As for the other projects on which I'm working, I still need to make a dress for Marti's Cecelia, but haven't been able to get in touch with her using the email address I currently have (I think I found her on Facebook, but want to approach her without sounding too weird).

I also need to make a couple more sample dolls for my class in May ~ Suffragette Sally.
Posted by Deanna Hogan

This is a lovely doll.Love her colours..

I really like the shape of her hair and the combination of her expression and tilted head.

Welcome back! And oh, I love this doll. I love the movement and vivacity suggested by the line of her head. And I understand about the DIP (dolls in progress.) I have lots!

I love her color and her hair...do you think her hands could be too big??? Maybe its just the photo??

She is gorgeous and I love her hair.