Yesterday was a LONG day ~ I worked on CEO Terry for about 14 hours (and about 10 hours before that, and 3 hours today). I actually gave my shift away yesterday, because I knew there was no way I could've completed him in the few hours I had left. New designs always take a considerable amount of time, but I had no pattern in my collection that would have worked.

Terry stands about 18 inches tall. Due to the short time I had to work on him, every supply I used had to be what I had on hand. I even sacrificed an old wool ski sweater for his vest. His clothing is not removable.

His hair took the longest, and I'm still not all that pleased with it. I'd hoped that I had some faux fur in a light blond color. That would have made his hair much easier to accomplish. I would have simply made a wig with darts in it and sewn it to his head. Unfortunately, it was a dark blond, and Terry has light blond hair. The only thing I had that was the right color was the mohair. You're not supposed to cut mohair, but I had to do something to resemble his hairstyle.

addendum:
Terry's Ice Cream Social was really well attended, which attests to how he has been thought of over the 20 years he's worked at the hospital (I've been there 23). He's a kind and gentle soul. 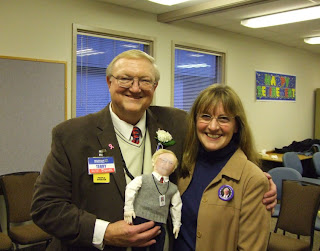 He received many special and thoughtful gifts, and I think his doll was a hit. Terry's wife attended as well, and it turns out she collects dolls. How cool is that?!

Deanna, he is fabulous. What a wonderful gift he will be for your CEO. Great job!

He's just PERFECT, Deanna!
Would have loved to have seen his face when he unwrapped the gift!

Deanna!
You genius, you! I would love to be there when he opens that package. 'hope someone has a camera ready to snap his initial response. Of course, you must know that I'm ready to mail you all the pictures of me and my kids! lol!
HAPPY NEW YEAR!
hugz
Pam

He's really good! He'll be very happy with him, and you'll probably get lots of orders now for that type of doll. Great job!
Lynne Yale

Wow, CEO Terry doll looks great! I bet he and everyone else will be blown away. Cheers and happy new year!

That looks terrific! From the picture it really looks like him.
take care
Kim

Hi Deanna, from a fellow RN. I love the gift doll...spooky realistic! Cool that his SP collects dolls. Great to follow your blog. From your friend at IW dolls group. Penni, PACU RN in Worcester, MA

oh, this is wondeful! Maybe this doll was a challenge, but the result is perfect!
Happy New Year to you.

Excellent results! Your skills never fail to impress! What a wonderful gift. :o)