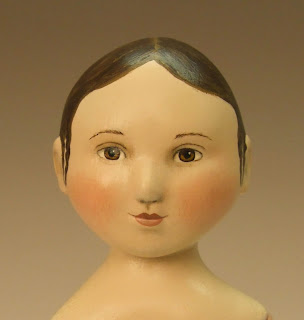 The January 2008 issue of Soft Dolls & Animals magazine has an Interpretive Doll Challenge with a pattern by Aletha "Ike" Putney. The due date is March 1, so I spent all day yesterday sculpting and painting her face.

This is a simple doll, with lots of opportunity for imagination. The entries I've seen so far have been wonderful. They are on the Yahoo group vintageclothdollmaking, as Ike is a member.

This is my doll "Lydia" so far. She just needs her costuming, and hopefully that will be completed today.
Posted by Deanna Hogan 0 comments 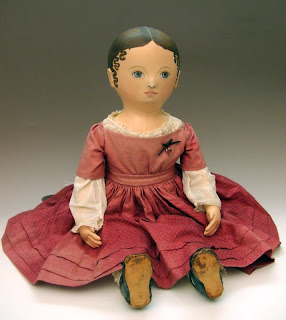 Well I can hardly believe it's been over a month since I last posted. Where did the time go? It's been a productive month. I've been busy with the release of a new pattern and mold. We went skiing at Mt. Hood. We helped our boys with downpayments on new cars (the cheapest car on the market - Chevy Aveo), so they can make really low car payments and establish credit. And work, of course.

I also had a booth at a doll show at the beginning of the month. While there I saw a Helen Pringle doll, which I just had to have. She's in great shape. Her dress is a little faded, but that just adds to her charm. Her tag says she was made in 1985, No. 31.
It's starting to look like Spring around here. The daffodils are coming up, and we've actually seen the sun.
Posted by Deanna Hogan 0 comments