Good grief! August's nearly over, and I'm sitting here wondering where it went. It's certainly been a full month, so I guess I've got an excuse for feeling tired and unproductive - which goes completely against my hard-working German heritage. So let's recap, shall we? It'll make me feel better, like I've actually done something! 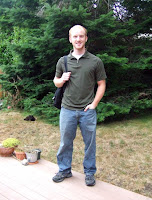 August 3 was youngest son Kyle's first day of school. He was accepted into a CNA program at the local community college. On the same day, he began his new job - Unit Secretary in the Emergency Department. This will transition into a CNA/Patient Care Tech position (with benefits and a raise!) as soon as he passes the course. It's nice to see him so enthusiastic. Eventually, he'd like to go on to nursing school. 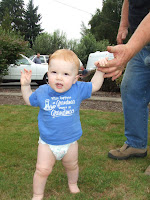 August 4 through 14:
10 full days and nights with our one-and-only grandson, Ivan, who just turned one. I'd forgotten how exhausting a little one can be. Did I mention he's just starting to walk? - just enough to get into things, but not graceful enough to avoid falling over onto hard objects. How in the world did I do it when my boys were small? Oh, yeah - I was perpetually sleep-deprived. Thank God for naps. 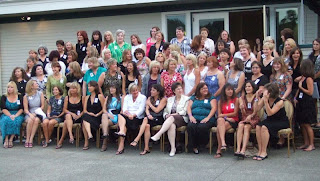 August 7, I attended my first high school reunion (I shudder to admit that it was my 30th). 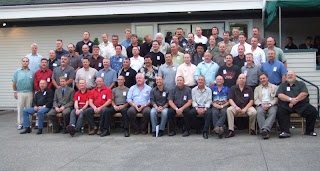 How did we get so old, I wonder? And did I age as well as the rest of them??? I'm in the row behind the seated front row, second from the right in the multicolored dress and dark blond hair. I'm standing next to my best friend, Sandy. I made my Dear Husband Chris (who did not attend my high school) accompany me. And now I owe him something huge, and this debt is hovering over my head, ready to spring when I least expect it.

There have also been barbecues, get togethers, sailing excursions with family, and the ever-present WORK schedule. We took my sister and nephew sailing on the 16th. The Astoria Regatta was this weekend, so there were many boats out on the river ~ sailboats, fishing boats, and a few ships and barges. It was an exciting sail.
Posted by Deanna Hogan 5 comments

The announcement of the winners are not yet on the Hoffman site,
and eventually their photos will be there as well.

Remember, you can see many more Hoffman Challenge dolls on my website!
Posted by Deanna Hogan 10 comments