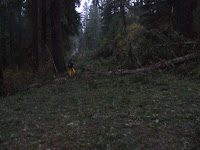 The Oregon Coast (and SW Washington) was hit by two back-to-back storms, the second of which was record-breaking. Sustained hurricane force winds knocked down thousands of trees, snapped power poles in half, ripped off roofs and caused general devastation. We were without power, telephone, cell service, 911, etc. for five days.
Monday after work, having no way to contact my mother-in-law and check in on her, we tried to reach her house. One route was littered with downed power and phone lines. The other was completely blocked with downed trees. We chose to hike down through the trees. 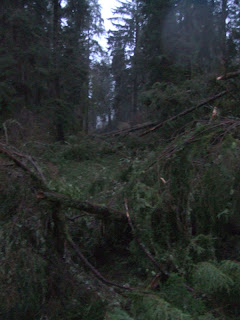 These are photos of Williamsport Road. The hike down was about 1 1/2 miles, but seemed much longer. That's husband Chris in the yellow pants in the top photo. The wind had died down a little by this time. Common sense said to stay at home, but we had to know that Chris' mom was alright. We had to climb over trees, assuming we were still following the road, as it was completely obscured with trees and branches. It was getting dark, so we had to move quickly.

Reassured Mom was ok, we headed for home. It was too dark to return home along the same route, so we had to walk a different route home, dodging downed lines in the dark and pouring rain.
The next day we went down to the marina to check on the boat. Many were damaged; ours did alright. Check out these photos by one of the boat owners who stayed near the marina during the storm. Scroll down for video of the marina. http://redhare.org/log/index.php 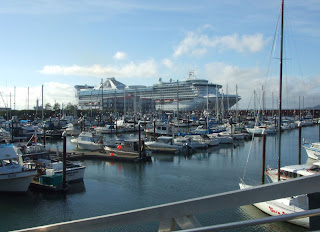 So, three days ago we head out for a leisurely sail on the Columbia River, only to find ourselves immediately accosted by the US Coast Guard. Why? Something to do with Homeland Security. We're guessing it had to do with the huge cruise ship moored right outside the only entrance to the mooring basin where we keep our boat.
The Coast Guard boat approached our sailboat very rapidly, came right up next to it, and demanded the IDs of everyone on board, along with the boat registration. These items we passed over the water to one of the CG crew, and they kept them for a good 30 to 45 minutes while doing background checks. I hope this was just a drill, but I sure didn't like the looks of the large gun mounted on the bow of the CG boat.
The next day, I headed back to the mooring basin after work to go for another sail. Deja vu. There's another cruise ship parked in the same darn place. Another Coast Guard encounter to look forward to? Not this time.
Posted by Deanna Hogan 0 comments 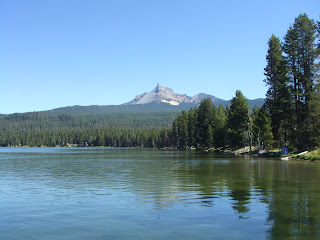 I've got another, relatively new blog, but this blogger seems to be a little more user friendly. I'd love to be able to transfer the posts on my other blog to this one, but haven't figured out a way to do it. Here's the other address:
http://blueheron61.bravejournal.com/

We got home Sunday afternoon, after having participated in Cycle Oregon's 20th Anniversary week-long ride. The scenery was spectacular, and some of the days were pretty tough. I'm happy to announce that I didn't ride the SAG wagon, 'tho may have been tempted once or twice.

And of course, there was much climbing. Thousands of feet, and sometimes 8-9 percent grade. I did it, but had a pretty good internal whine going. I did NOT opt to do the Crater Lake ride on Day 3 - I've done it before, and instead enjoyed the beautiful Diamond Lake, pictured below, with Mt. Thielsen in the background. I've got more Cycle Oregon (and doll) photos here:
www.picturetrail.com/blueherondolls
Posted by Deanna Hogan 0 comments

For Better or Worse For better or worse, I'm leaving in the morning to participate in Cycle Oregon's 20th anniversary, along with 2000 other bicyclists. If you don't hear from me again, it means I will have expired somewhere along the route.

My lycra shorts are nearly dry and ready to pack. If you've never spent much time in the saddle, you'll know it's not for the fashion statement, but out of necessity, that bicyclists wear lycra.

I did manage to ride 50 miles last week, then hiked Saddle Mountain with some friends. And I rode 23 miles this week. While it's not nearly enough, it'll help.

Here's the top of Saddle Mountain, where we ate our picnic lunch. My friends Allison and Autumn are in the corner of the photo. The vista was beautiful.
Posted by Deanna Hogan 0 comments I finally finished my characters from Horns and Wrinkles. These are the two kids on the cover. It's a cute story, but I had the hardest time getting motivated to make the dolls.

They're not very tall - only about 8 1/2 inches including the base. I'd love to make a troll - one of the other key characters in the book, but feel the need to move on.Next, the Hoffman challenge. But tomorrow morning we're cycling Puget Island, I think.
Posted by Deanna Hogan 0 comments

Jumping on the Blog Wagon I know I'm going to be terrible at keeping up with blog entries, but thought I'd give it a try, anyway. This is a difficult time of year (March through October). There are so many things to do, and very little free time. Bicycling season has started again, and it just gets busier and busier at work. Sometimes I come home from work and just don't have any juice left to ride or make dolls.

Saturday I participated in the "Reach the Beach" ride, which raised money for the American Lung Association. We chose to ride the 100 mile route, from Portland to Pacific City on the Oregon coast. It's a great bicycle ride, especially the last 25 miles or so, and for a great cause. The weather was overcast and we were greatly concerned that it may rain, but we lucked out. I hate riding in the rain. We did this ride last year, but had many more miles under our belts prior to the ride.
While in recuperation mode on Sunday, I worked on my doll for the Hillsboro Library display. The doll club to which I belong (Reigning Dolls & Bears) has done a challenge like this before. We each select a book for inspiration and turn characters into dolls. This display will be at the new Hillsboro library during the month of June (http://www.libraryfoundationhillsboro.org/). I chose the book Horns and Wrinkles by Joseph Helgerson.
After this project, I need to get busy making dolls for the ODACA/UFDC convention in July. It will be held at the Detroit Marriott Renaissance Center. I'm dragging my husband with me, as I'm not the sort of person who's comfortable traveling alone. Besides, he's good company and can help carry my bags.
Well, I think that's a pretty good start on the blog.
Posted by Deanna Hogan 0 comments We had a terrific storm last night and today. I love the sound of rain on the roof. And just when I thought the sound couldn't get any louder, it did.

Today I finally finished my Treasures of the Gypsy challenge doll, and got her sent to Texas at no small expense. I named her "Merryl" which means "bright as the sea." Including her shelf, she's 25 inches tall. It was fun to embellish her with lots of vintage jewely.

Now I need to move on to other projects. I'm trying to get three sample dolls done (reproduction "alabama babies"), as I'll be teaching this class in January at the Calico Cat in Auburn, Washington. I taught a class there last January, and experienced the worst road conditions we had all winter (ice, snow...). Fingers crossed for this year.
Posted by Deanna Hogan 1 comments