I can't believe it's already the end of August. Time flies. It feels like I've done nothing but work the past couple weeks. I've certainly not made any dolls.

I did work on a huge slideshow project each night after work for a retiring coworker/friend. It was much more labor intensive than I'd anticipated. I edited more than 300 photos, and used my Photoshop Elements program to create the slideshow. The hardest part was selecting the music, but I think I chose well.

The retirement party was last Friday, and I shared the slideshow on a big screen. Many got up and spoke - not a dry eye in the house! It was a huge success, and I'm still burning copies of the slideshow for coworkers.

My husband and I both have the day off today, so we rode the tandem bicycle downtown for coffee. We haven't been on that bike in years (BTW, tandems are known as divorce bikes). Then we took the dog for a walk. Now I need to get this disaster of a studio straightened up so I can work on dolls!
Posted by Deanna Hogan 1 comments 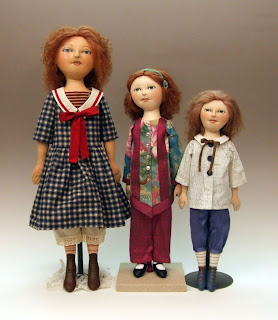 My "Next Pattern" poll closed at the beginning of the month, and here are the results:


So here's an update:
I'm now on page 4 of Verity's instructions, and the pattern will probably be published with two sizes included. The photo above shows Verity at 100%, 85% and 75%. I'm leaning toward the 100% and 85% dolls for the pattern, with the sailor dress for her clothing.
Posted by Deanna Hogan 5 comments

Yesterday and today (and probably tomorrow, too) have been spent collating doll patterns, printing cover photos, folding, and stuffing ziplock bags. My stock of patterns was low, and there's an upcoming doll show in September in Portland, Oregon.

Sleeptime Santa was designed in December 2007, and the pattern was completed at the same time. But as I also submitted a somewhat abridged version of it to Soft Dolls & Animals magazine, I have delayed its release. I expect it may be in the next issue of the magazine, as the holiday season is fast approaching. For that reason, I decided to release the pattern today. You can find it here: http://blueherondolls.com/blue_heron_patterns.htm

I still have a lot of catching up to do after Vegas, and my sewing room is a disaster area. Verity is standing on my work table, a constant reminder that she needs to be an official pattern. I'm getting there...
Posted by Deanna Hogan 0 comments As promised, here's picture of baby Ivan. He's 9 days old today. Mom, Dad and Baby are here for the weekend. He woke Mom up every hour last night...how I don't miss those days, but somehow we all survive them.
Posted by Deanna Hogan 7 comments