I've been reading "The Artist's Way" by Julia Cameron. I've had the book for a number of years, but just picked it up again. I wrote my first three "morning pages" this morning. Didn't take long to fill the pages - guess I had a lot on my mind. Question is, can I keep it up?

Now I need to pick an "artist date" for this week. These are solo excursions. There are a few galleries in Astoria I've never been to . I may do that. Or I might check out the fiber studio (though it's closed every time I drive by after work).

The Perks of Insomnia (or what I did instead of sleeping)

I can hardly believe AFICC (Columbus, Ohio) is next month. I've got some homework to do before the conference, and supplies to gather. I was so excited to use my Frequent Flyer Miles for the FIRST TIME ever. That sure took the $$ pressure off!

Last AFIC (2011, I did not attend), I was able to design a quick doll for the designer booklet Cyndy Sieving assembled for participants. This booklet was a very cool idea, and as a contributor I got a copy of the booklet as well. Here is "Mirabelle," my primitive contribution.

The past 8 months or so have seen a dramatic decrease in free time for me, so when the March 1st deadline came and went, I was a little sad that I wouldn't be able to contribute. Then Cyndy extended the deadline. That, combined with a horrible sleepless night (spent ruminating on so very many things), I essentially designed a little doll in my head, instead of sleeping, while tossing and turning. Of course, I paid for it dearly the next day at work... don't worry, all my patients survived the day.

I had a few hours this weekend, so I was able to put my idea down on paper as I created the actual doll ("Toobies"). It was like the work was already done. It's a pretty silly doll, but one that goes together quickly. 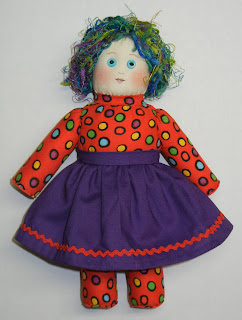 On my to do list (since visiting New Orleans last summer) has been to design a "Voo Doo" (or "Good Intentions" doll as its benevolent counterpart), and this design fits the bill perfectly. While Cyndy's booklet is limited to one-page-only, I hope to expand the pattern to include all sorts of variations.
Posted by Deanna Hogan 2 comments

I'm not quite done with my first March assignment, taught by Tamara Laporte - I must wait for some alphabet stamps to arrive. I'm probably going to paint the border around the heart with a darker brown, possibly with yellow/gold highlights. There are messages of gratitude to various family and friends written in the tubes glued to the page. 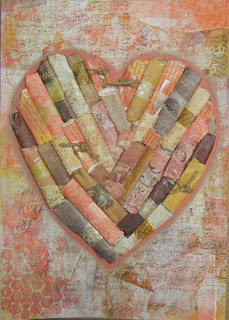 My alphabet stamps arrived, and I like the darker paint around the heart. The word "Gratitude" is stamped onto twill tape. 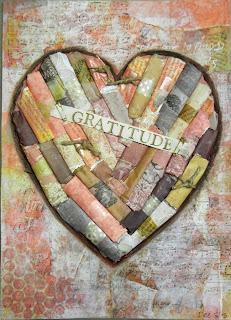 Today I finished my Week 11 assignment, taught by Michelle Kral (Mitsy B). For some reason, I had trouble with this one - not with addressing the bad aspects of myself, but making an "ugly" page. For the cover (below), I chose sickly green, yellow and black paints, and scraped those colors on with a credit card. I added mud brown spray inks, then splotched on yellow ochre and lettuce green paint. And I liked it. I didn't think it was ugly, and I was ok with that. I like it better that way. 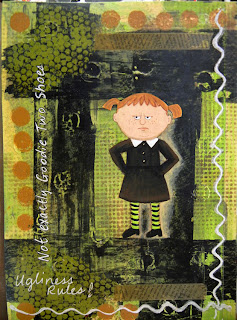 For the inside of this pop-up page, I continued with browns, ochres and greens (teal this time). I used my alphabet stamps for the first time. And yeah, it bugged me that I misaligned some of the letters (refer to the "Perfectionist" quality). It was fun making the pop-up shapes, too. Michelle provided templates for these. 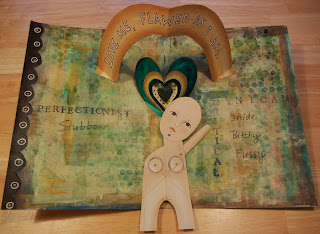 Yesterday (April 6) was a productive day. Not only did I finish the two previous lessons, but I also completed this one, taught by Mindy Lacefield. It went pretty well for the most part, until I sprayed a workable fixative on the whole thing and some stamped ink from an underneath layer bled through the face on the shorter girl. It was an interesting look, but it was not what I had in mind and I was quite peeved. So I did the best I could to paint over the stains. Lesson learned - spraying VERY LIGHTLY the first few times might have prevented this, or possible using gesso instead of white acrylic paint for the face. 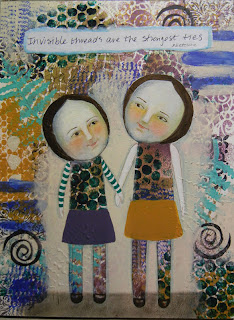 The first layer on the background was a poem by Rumi, which filled the page entirely with overlapping handwriting in a variety of colors. I've seen quite a few references to Rumi on various journaling sites, so I had to look him up. Rumi (30 September 1207 – 17 December 1273), was a 13th-century Persian poet, jurist, theologian, and Sufi mystic. Rumi's importance is considered to transcend national and ethnic borders. His poems have been widely translated into many of the world's languages and transposed into various formats. In 2007, he was described as the "most popular poet in America."

Colleen Babcock has some Hoffman Challenge dolls posted on her blog HERE.  I've got the challenge fabric for 2013, but haven't given any thought to what my doll will be.

Don't forget to send me photos of your Hoffman dolls! I've begun setting up the Hoffman pages on my website, so as the dolls start coming in I'll be featuring them.

The Hoffman site has the 2013 fabric posted, as well as the rules for this challenge:
http://www.hoffmanchallenge.com/
Posted by Deanna Hogan 1 comments