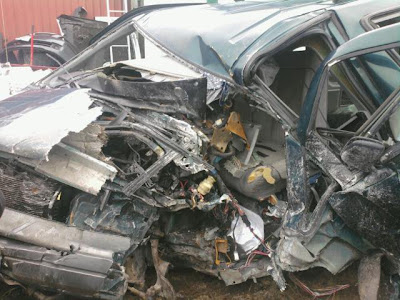 deanna, this is great!! i am so glad that you were able to attend this conference and meet ben!! i am so thankful for you and your team at cmh, i being one of the really sick patience that has entered that er sooo many times i myself have you all to thank for my life!!! keep up the great work!!!

I too use to be a responder for traumas while working at the downtown hospital. We'd get car accident's like Ben which sometimes did not have such a ending. The "dance" of the team is amazing to be a part of especially when you get to see the people recovered & going back to daily life. I think one of the worse cases I'd been a part of was a botched robbery at a local restaurant. The manager, a young woman, had been shot multiple times in the abdomen. We all worked hours and hours doing everything possible, but she did not survive. Later, her family wrote a letter to the CEO thanking everyone for trying to save their loved ones life. Our group just broke down and cried. So much tragedy, but so many lives saves by the unsung heroes at trauma units all over this world.

This is such an awesome story, and I'm so glad it turned out well for Ben, Deanna. Your ER team is awesome!! Sometimes things just don't work out well, for one or many reasons, and that's got to be so hard for everyone in the ER.
LaMont and I and our families are so grateful that his aneurysm was found and that it didn't burst before they got him to surgery. We are so glad we live now and not a hundred years ago!!!!