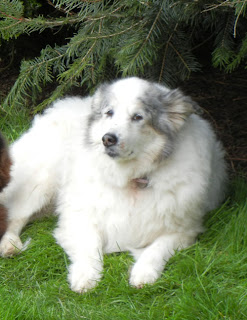 Sometimes we have to make the really tough decision to let something (someone) go. So we said our goodbyes to our beloved Misty just a short time ago.

The last few months have been increasingly difficult for her to get up on her own ~ we've had to pick up her hindquarters because her hips were so bad. She did ok once up, for the most part. But as she appeared to be having more and more discomfort recently (despite the pain medications), the decision became more urgent. And more humane.

Which doesn't mean I'm not sitting here crying my eyes out over one of the best dogs we've ever had. We were blessed to have her in our family for as long as we did.
Posted by Deanna Hogan

Deanna, I'm so sorry to hear this. It is always the toughest decisions we as pet owners must face. We love them so we let them go when the time comes.
dot

Oh I am so sorry to read of your doggie's passing, it is very hard to let them go. I have photo collages of all my pets through the years, I love remembering them, as I am sure the fond memories of your Misty will be remembered forever in your heart as well.

Oh Deanna,
I'm sorry to hear of the lost of your treasured furbaby...
big hugzzz

Sending you hugs. I'm glad you had this loyal friend in your family. I'm sorry you had to let her go.

Dear Deanna and family, This is never an easy thing to have to do. My family just had to make the same heart break decision two weeks ago. Lucy was a good loyal friend and the day came when she also just couldn't get up on her own. After many agonizing day's we had to let her go. God bless you all at his time.
Mary Louisa

What a beautiful love. I'm so sorry for you. Cindy

I went through this in November. I had to have our darling cat euthanized after having her with us just coming on to 19 years. Really tough, sending a comforting hug your way...Romona

I am sorry for your loss X

Hi Deanna, so sorry for your loss, it is hard, but think it this way, she is not suffering any longer and had a wonderful life with you and your family. Hang in there!
Hanni from Portland/Depot Dolls

So sorry, Deanna. It's just hard, and no matter how many times you've had to do it before, it never gets any easier.

So sorry for you Deanna, pets are like family and loosing one is so hard.