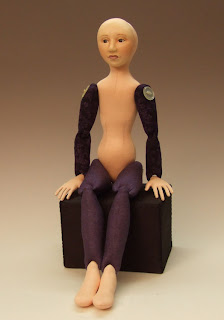 I'm happy to say I've done at least some sewing over the last couple of days. Not terribly productive, but plugging along. This is another "Averill" doll, commissioned by a friend and co-worker. The most time-consuming stuff is done. All that's left is the hair, clothing and boots.

She's made from some sort of velour, which is much thicker than the other stuff I've been using. Made turning those fingers right side out a bit of a challenge. She has buried bead joints at the elbows, wrists, knees and ankles; button joints at the shoulders and hips. 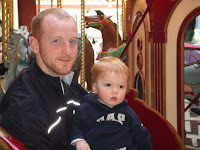 This photo's just for fun. We took Ivan to the carousel in Seaside, Oregon. I don't know that he enjoyed it that much (especially when he was riding the bunny, going up and down), but he was sure cute. He did better on the bench, sitting on Daddy's lap. The old carousel has been restored beautifully. Oh, and it's conveniently next to a fabulous toy store called "Under the Big Top." Coincidence? I think not.
Posted by Deanna Hogan