My first real site-seeing excursion here in Chicago was today. We immediately noticed that something was going on right outside our hotel. There were crowds of people and streets were blocked off. Then we heard a movie was being filmed (we found out later it was "Transformers 3"). 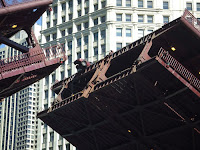 I saw a car hanging off an open bridge and men with automatic weapons running up and down the stairs on the opposite side of the Chicago River, with lots of smoke and fire. Then I heard someone yell "30 seconds!" Thirty seconds to what!?

A helicopter hovered overhead, and men jumped out with parachutes...right over the river and between the skyscrapers. They landed on the sidewalk on the opposite side of the river. That had to take some skill! I have no idea if these were the "good guys" or the "bad guys." 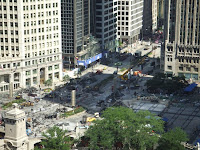 I was able to take a photo from the hotel, of the city block that was barricaded. It's amazing how they made it look like a war zone, with rubble and burned out vehicles.
After all that excitement we made our way to the Art Institute, which was walking distance from our hotel. They currently have a really wonderful Impressionist exhibit. There was so much to see, and I know we missed some of it. Below is one of my favorites. 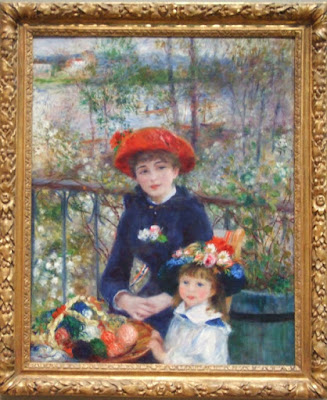 I'm glad you had a great time. It's a wonderful museum. I usually go every Thursday to spend some hours in the library too.
I didn't go to the ODACA sell, I didn't know that there was one. I went to the NIADA sell and met some of my favorites doll makers. I wrote a post about it on my blog.
Do you have pictures of the dolls that you sold? Now I'm sad that I missed them.
Bests,