The past few days I've been working on a design for a doll with a vintage feel. Something simpler than some of my other dolls. My jumping off point was a pattern for a repro Presbyterian doll by Lucinda Durbin. Presbyterian dolls were American folk art rag dolls from the mid 1900s, originally created to raise money for the church. They had oil painted faces.

I made one back in 2009, designing my own costuming:
http://blueherondolls.blogspot.com/2009/06/presbyterian-doll.html

And another, playing around with printing a face from a vintage photo directly onto the fabric:
http://blueherondolls.blogspot.com/2009/10/little-red.html

And finally finished one this summer from a previously sewn/stuffed body (altering the arms and legs, using my "Amandine" pattern):
http://blueherondolls.blogspot.com/2015/07/a-last-minute-doll-for-odaca-day.html

I've got lots of cheapo muslin, and have been playing around with a couple things: a chin dart, the fabric's stretch direction, and how to eliminate the neck pucker that can sometimes happen.

The doll on the left is the first one sewn/stuffed, where I was still working on the shape of the face front. Next, I marked the other three with the stretch direction I used. Eventually, these will become finished dolls, through I still want to try the final adjustments on a variety of fabrics to see how that turns out. 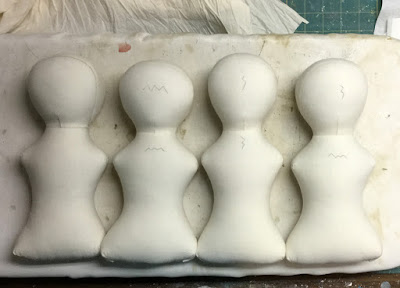 Isn't it amazing how just the smallest adjustment can create a big change in the result? Interested to hear what you're learning with these. :~)

I'm learning that sometimes the less expensive fabric for the doll body is best - especially for one that will be painted in the end anyway. 100% cotton muslin for quite forgiving.

Doing the four dolls this way was a great experiment in the change in shape (particularly of the head) with a change in stretch direction.