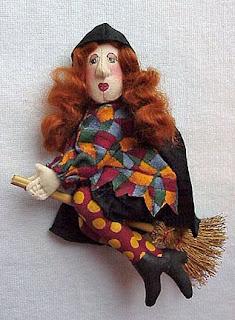 It's mid September already, and I thought it was a good time to brush the dust off my Hazel the Witch pin doll/ornie pattern. It's been out of print for quite some time, due to lack of a decent cover photo.

This is one of my earliest patterns (copyright 1999), and the original cover photo was one taken with my 35mm camera (pre-digital!). Well, I have no idea where that particular negative is, so had to make do with this digital photo of a later doll. But this Hazel had some needle sculpting that the original doll lacked. So that meant I had to include those instructions.

Now it's time to made another Hazel (this was was given away in a pin doll swap). Maybe I could make some improvements, too. I'd love to be able to make one in the coming week, as there's a doll show in Portland next Saturday. http://www.dolls4all.com/
Posted by Deanna Hogan

That is the cutest witch! I've never seen it that I know of in your patterns. By the way, do you have any Springmaid Tremode extra you could sell me?? LOL I've lost my supplier.