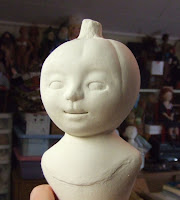 I had to take a look at some of the pumpkins at the grocery store, to get a better idea of how the stem looks. I used a scalpel to dig out a depression at the top of the head, then added the basic stub of a stem. When that dried, I added a little more detail.

Now that I take a closer look at the photos, I see where the doll's left 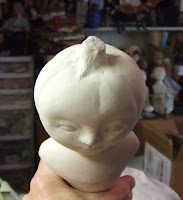 upper eyelid crease is higher than the right. I'll add a little more clay. When that's dry, I'll paint the clay with gesso. I think I have some dark brown gesso, and I think that might work better for an under-layer than the usual white.

I sewed and stuffed the arms today, and will paint them with gesso, too. Then I'll 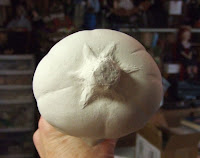 mix up a big batch of orange, with some varying colors for interest.
I'm not going to pick out the colors for her dress until I see how the orange turns out.
Posted by Deanna Hogan

You are doing a great job. I love seeing how you move through a WIP.

Wow...her stem is fabulous! I can't wait to see her in color!