It's a lazy day, and I plan to putter around the sewing room and (hopefully) get a doll done. There's something between snow and hail falling from the sky. No reason to go outside.

I've been working on two challenge dolls simulateously (see previous post.) Since both dolls are painted it's easier to do the painting on both of them, and clean up the mess once.

Arms and legs are hanging to dry, and as soon as I finish with the hair, it's on to the costuming. I bought some lovely vintage-looking prints from Lisa Shafer's shop last May, and haven't had a chance to use them. 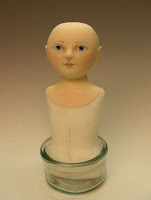 This is an Izannah Walker inspired doll. She's really what I'd call a "salvage project." In 2006, I was trying to design something new for the Hoffman Challenge. This doll started out as prototype #1, which I set aside because her body was too small for her exaggerated head, and she had a significant blow-out in the center of her face. I went on to fix the body size problem (prototype #2, my Hoffman doll "Carlie"), and later to create the same doll in muslin, with painted head, arms, etc. (Verity doll).

Last spring I revisited this doll, with an inspiration to experiment. So I cut off her head, gave her a new body, fixed the blow-out with paperclay. Then I coated her with Messy Mix, and gave her a cloth-over. Then painted that. There are some progress photos HERE. This is my Izannah Walker Inspired Album - just scroll down, and you'll see her decapitated head on a bottle and subsequent progress photos.
Posted by Deanna Hogan

Yanno, I think I figured out why I love your dolls so much. They have such a feeling of serenity about them. Almost like looking at a Buddha figure. It makes me want to gaze all the longer. Have I told you I love your dolls? lol

Oh, I love it when dolls go through extreme makeovers! If only all my "salvage dolls" turned out this lovely. She's wonderful, Deanna!

Bonnie and Dixie,
Thank you! I'd meant to reply earlier, but have been up to my eyeballs with work and dolls. That's a good thing, right?

Anyhoo, today's a rest day, and I'm enjoying visiting blogs. Your blogs are among my favorites. Bonnie - Juliet is going to be stunning!